Petri Räisänen (born August 13, 1967) is an internationally known and respected Ashtanga Yoga teacher. Petri started practicing Ashtanga Yoga in 1988 as a devoted student of his Guru, Sri K. Pattabhi Jois, and was authorized to teach Ashtanga Yoga in 2001 by Guruji. Petri is careful to pass on his Guru's exact teachings.

Petri is co-owner and director of Ashtanga Yoga Helsinki, one of the world's largest Ashtanga Yoga Shalas which he co-founded in 1997. Sri K Pattabhi Jois blessed the school to teach the traditional Astanga Yoga method.

Petri focuses on integrating healing and therapy with yoga, meeting student's individual needs and guiding their progress. Petri's yoga pose adjustments are gentle, effective, therapeutic and, according to some, almost magical. They originate (besides his own practice and teaching) from his past work as a traditional Finnish folk healer and naturopath. His friendly, relaxed behaviour and intuitive perception give an open, energetic and meditative atmosphere to his classes.

In 2004, Petri wrote "Astanga - The Yoga Tradition of Sri K. Pattabhi Jois" in collaboration with Sri K. Pattabhi Jois and his grandson, R. Sharath Jois. The book introduces the primary series (1st series) Astanga Yoga method and philosophy, as well as its potential as a physical, mental, intellectual and spiritual practice. His intermediate series (2nd series) book "Nadi Sodhana" was released in 2008 and is written mostly from the interviews with Sri K. Pattabhi Jois from 2006-2007 in Mysore, India. Both books are written as part of Petri's ongoing pilgrimage into Astanga yoga's inner word, with a great sense of respect towards his Guru and the Yoga Tradition. Petri has studied raw/live food and worked in a raw food restuarant, and has attended Reiki healing workshops and passed the first two levels. From 1989-1991, Petri studied to become a Naturopath, leading him to open his own Health Center "Afrodite" in Kaivopuisto, Helsinki. Petri has gone on to study various healing methods such as Jäsenkorjaus (Finnish Bone Setting), Kahuna techniques of Shamanic healing (Hawaii), and Swedish Massage. He uses his Folk Healing techniques in his asana adjustments and teaching. 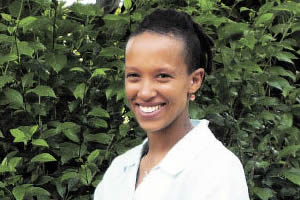 Wambui Njuguna-Räisänen took her first yoga class when she was 16. It proved to be the therapy she needed during rigorous, professional dance training. She continued to practice different types of yoga throughout college and graduate school.

She came across Ashtanga Yoga in 2008 when she was living in Abu Dhabi. The structure and consistency of the method was the grounded discipline she needed at that time. For the past ten years, Wambui has been immersed in Ashtanga yoga and feels deeply grateful for all what the practice has brought to fruition, both in her personal and professional life. She edited the English version of Ashtanga Yoga: The Yoga Tradition of K Pattabhi Jois and translated (Finnish-English) Nadi Sodhana: Yoga in the Tradition of K. Pattabhi Jois. Many people have started practicing Ashtanga yoga using her Half-Primary series You Tube video, which has garnered more than 1.6  million views. Wambui practices with Sharmila Desai at Ashtanga Yoga Morjim.

Currently, in the wake of #metoo and the collective shift towards decolonization, Wambui’s moved towards teaching yoga through an explicitly trauma-informed, anti-oppressive lens. BIPOC and/or LGBTQIA+ communities have been the voices most silenced, and are the bodies most left out of the healing space while simultaneously being the most impacted by systemic trauma. Therefore, creating wellness spaces that feel more welcoming, inclusive and accessible is of utmost necessity and importance. Together with her massage training (Chavutti Thirumal) and meditation advocacy, Wambui strives to work at the intersection of social inclusion, equity and wellness.

Wambui’s ongoing education has involved the following Off the Mat Into the World courses: Dismantling Racism with Michelle C Johnson; Healing Yoga for Refugees, Asylum-Seekers and Displaced People with Our Mala’s Emily Brett; and Yoga for Self-Regulation and Trauma; Trauma & Social Justice with Hala Khouri; and Accessible Yoga with Jivana Heyman.

Wambui Njuguna was born in Nairobi, Kenya to an English-Danish mother and a Kenyan (Kikuyu) father. She was raised in the United States, has worked and lived in Chile and the United Arab Emirates and is now based in Helsinki, Finland where she lives with Petri and their two sons.